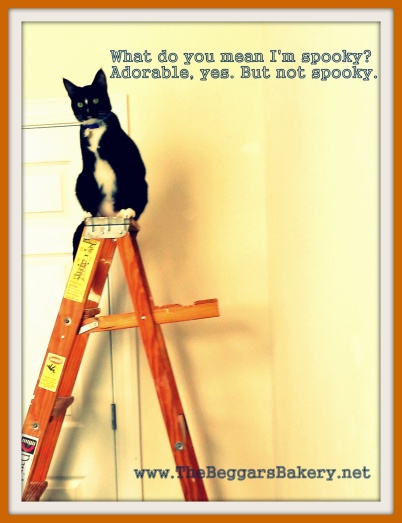 What terrifies you…really makes you squirm?

I am no great fan of Halloween and haven’t been since I was knee-high to a grasshopper. Even as a teenager, I shied away from horror flicks and haunted houses. Regular life offers up enough to give me the heebie-jeebies, thank you very much. Like, the political climate. The economy. The Kardashians. Twerking.

But my interest in the supernatural? That is at an all-time high.

Friends and ghost-hunters, trick-or-treaters and trunk-or-treaters, fans of the unexplained, skeptics and intellectuals…..lend me your ear.

I’d like to invite you to a kind of (Holy) Ghost-walk with me. Open your eyes to a supernatural Force too big for science to explain. Open your mind to the unseen; the unexplained.

The supernatural doesn’t have to be scary.

There is a tremendous allure in the paranormal. Turn on the television, open your web browser – the unexplained is everywhere. The definition of “paranormal” is “of or pertaining to the claimed occurrence of an event or perception without scientific explanation, as psychokinesis, extrasensory perception, or other purportedly supernatural phenomena.”

Science simply cannot explain everything we encounter, and society (especially on Halloween) tends to glorify that which terrifies and goes “bump” in the night. But the opposite of “terror” is “security,” and  who doesn’t need that in these scary times?

Truly scary events are daily happenstance around the world. People do unspeakable things to one another, supremely evil. If supreme evil exists (and it does, just look around you), do you also believe in Supreme Good?  Supreme Good, in the form of Love. In the person of God.

So many in this generation will believe in Bigfoot and poltergeists and alien abduction without question, but deny that a holy, good and pure Perfect Being exists at all.

Maybe it’s easier to become fascinated with hauntings because there are indeed manifestations of life beyond what is tangible, but from a distance. There are signs of it, but no proof that it exists. The obsession with television shows featuring paranormal activity are so popular because, although it takes vulnerability to live in a haunted house, it takes very little to observe the manifestations from afar. If you live in a house with evil spirits, you can move away.

But if you live in the presence of Supreme Good, it is a riskier venture. It requires faith in the unseen, vulnerability. Once you’ve acknowledged that God is real, you cannot move away from the love. And even that possibility terrifies a lot of people, makes them really squirmy.

There are real and personal implications for believing in the unexplained saving grace of Jesus Christ. And there are manifestations of God everywhere also. Loving, selfless acts and deeds are also daily happenstance. Signs and wonders, available to all who seek.

Being a child in the 1970’s at Halloween was just the best. Am I right?

If you are a 40-ish person, you know what I’m talking about.

This is not a blog post about Halloween as a celebration of evil, because in 1976,  I had no idea that there was a dark side to the day. It was not about evil (or breathing or seeing in a mask.) I am no fan of modern-day Halloween, or what it represents, but when I was seven years old, it was all about the candy.  And all about fun.

The coolest thing was to be ‘ready’ to trick-or-treat at 6 p.m. That was the earliest acceptable time, because “you wouldn’t want to interrupt anyone’s dinner.”

You gladly wore the standard plastic and vinyl costume (see photo above. I assure you it is not photo-shopped. No, not even the plaid couch is photo-shopped.)

While in costume (mask must be engaged before leaving your house,) your eyes never lined up with the  holes. They  were not really  for seeing out of; just holes punched randomly in a factory, and seldom over the actual eye design.

Actually, “pants” weren’t part of your costume at all. It was, more of a Onsie made from a  good-quality lawn bag – with other holes for your limbs,  and a tie on the back of the neck that your mother always tied way too tight.

As a result, you stumbled around over your plastic pants like some kind of wonky-eyed mutant cousin of whatever character you were trying to portray.

You collected candy from strangers who weren’t really strangers, because all the neighbors knew each other, at least casually.  Nobody checked your candy  for razor blades or poison, because such a thing nearly never happened (and, if it did, it was the stuff of Halloween-lore instead of a daily news event.)

Your parents told you ahead of time – before you set out with your friends unchaperoned – which houses to skip (“Don’t go to that house….the man that lives there gives your mother the creeps!”)  Every other home that displayed a lit porch was open for business, and that was nearly every single one.

You trick-or-treated with the standard-size orange plastic pumpkin. No pillowcases. Greed was not a virtue then, and greedy children were frowned upon.

If you dilly-dally at someone’s door to check your stash, it was considered rude.

Also … if you dilly-dally at a door, you might walk home with an entirely different group of kids than you set off with (since there were many Caspers, princesses, H.R. Puff-n-Stuffs, and yes…sheets with eyeholes cut in them ala Charlie Brown.) Somehow, that was okay. You eventually wandered home, having only lifted your ill-fitting mask to stuff candy in your mouth.

No self-respecting teenager would caught trick-or-treating. That was for babies. Sure, every year there was a  random sprinkling of young teens in lame costumes, trying to milk the last Milk Duds from their childhoods. But there were not roving gang going door-to-door, comprised of people old enough to vote in an election (or run for an election, for that matter.)

Driving to other neighborhoods for better candy was not groovy. It was tacky.

You always said thank you, even when there were no parents around to nudge and remind you.

If you were the kid whose front tooth was lost in a caramel apple, yours were ultimate bragging rights on Nov. 1st.

And yes, you ate genuine candy apples, and bobbed for the regular kind – in a bucket of water, and without wearing a life vest or having your parents sign a waiver prior to bobbing. Quaint in retrospect.

Your neighbors held Halloween parties in their living rooms, and you were invited to them without social media. All you had to do was ring the doorbell, say “Trick-or-Treat!” and you were invited in for purple punch and cookies with icing-spiders on them, while Monster Mash blasted from the speakers from an 8-track. Nobody issued an Amber alert for missing trick-or-treaters, because it was a different world.

When you were a tween, it wouldn’t have occurred to you to dress as the “naughty” versions of superheroes, cartoon characters, or inanimate objects. You didn’t try to sex-up Raggedy Ann, not even ‘just for Halloween.” Childhood icons were not fodder for making naughty, and if you did – you were perverse.

(Sidenote: It’s sad to me that any beloved character can be made “naughty” now. That Raggedy Ann – perfect in her innocent doll-ness – is so often sluttied up with stilettos and a gingham bustier, and society is A-OK with it. It’s not sad because I’m a prude, it’s sad because, well – it should make all of us sad.)

When you were a trick-or-treater in the ’70’s, things got real at dusk, and legit scary at dark, when the “older,”  8-12 year-old kids made  spooky ghost noises in the dark.)

There were no store-bought, life-sized Frankensteins from Lowe’s adorning the porches in your neighborhood, mechanically raising zombie-menace arms. Inevitably, one of the Old Fart neighbor dads would have painstakingly painted a Monster-face on, giving you a personal (but purely fun) scare.

You traded candy with your friends on somebody’s front lawn after trick-or-treating, and after divvy-ing it up, took care to wipe the blades of grass off each piece.

After the swapping, you didn’t feel entitled to better candy ..,.an  “all-Hershey Halloween.” Your parents had just sanctioned the pillage  of sweets  from the whole neighborhood!  How could it BE any better?

By the end of the evening, you returned home thoroughly winded – mostly from breathing in your own carbon dioxide – infused with the smell of plastic – from wearing your mask for hours. But, who needs oxygen when you have this much CANDY?

So. Much. Candy. And evil-free fun.

You didn’t get treats every day, which made the veritable sugar buffet  even sweeter.

I’m not a fan of Halloween now, because it’s a different world and there is so much wickedness on the daily. Back then, when I was seven, the only dark thing about Halloween in my young life was the Mounds bar in my orange, plastic pumpkin.

It was a different world.

Mercy, it was glorious.