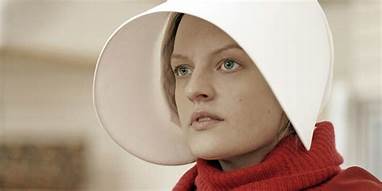 By: Jana Greene
Okay. I’m about to pull a Jesus juke The Handmaid’s Tale.
If you’re not familiar with the show, that’s too bad. Remedy that please.
The protagonist – played by Elisabeth Moss – is everything a heroine should be, including relatable and flawed.
In addition to giving me the compulsion to approach strangers in the produce section of the grocery store and whisper, “Blessed be the fruit” for my own entertainment, The Handmaid’s Tale is also an incredible series laced with danger, truth, and foreboding.
SO much terrifying allegory for a world that I could not have imagined in my younger days, but is now reality. It is about having human rights stripped away – even one’s very identity.
No spoiler alerts here, just little old me spreading thoughts for your perusal.
This show illustrates religion vs. grace in an embarrassingly bright light.
It’s about what happens when an ‘elite’ few in are allowed to run amok over its own citizenry, in the name of the “common good.”
Or worse, in the name of God.
And I guess that’s what especially pisses me off about the world we live in. We use His name to damn and to bless, as if we had that kind of power. Look at what a mess we’ve made! The evidence perpetuates itself –  God is rules. God is anger. God is the Nanny State.
Except that He is not. He is courage. He is compassion. He is freedom. The Word is a person, not a book.
Without going into spoiler-heavy detail, let’s just say in this cliché: the season two finale had many twists and turns. But all the while maintains it’s message:  You can try to twist ideologies to glorify your own, or embrace the truth about who you are. We cannot be boxed; Commanders, Guardians, Marthas, nor Handmaids.We were created for the wild liberation of individuality.
The fact that love conquers insurmountable odds is the godliest tale.
We simply cannot worship political parties.  Both have to potential to land us in a Orwellian spot like Gilead, one just as easily as the other. God has no political agenda. Only God can show us how to fight for justice while keeping our love front and center.
Like Jesus. Or like Offred….
I mean, JUNE.
May the Lord open.