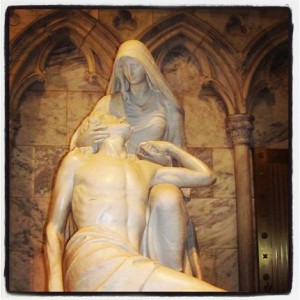 Who do you say that he is?

He asked me to ask you…..who do you say that He is? He is quite concerned about what you think of Him.

Do you say that He is Historical Figure, criminal, prophet or ordinary man? Would you say that  He is the Son of the living God?

Writer and scholar C.S. Lewis, who was an avowed (and very vocal) atheist for many years before accepting Christ described him this way: “Either this was, and is, the Son of God, or else a madman or something worse. You can shut Him up for a fool or you can fall at His feet and call Him Lord and God. But let us not come with any patronizing nonsense about His being a great human teacher. He has not left that open to us.”

This Jesus, who so radically changed the world, was brought up on bogus criminal charges at the end of his earthly life.  He was the first and only completely perfect human being  to have walked the earth. His reward? Death by brutal crucifixion, burial in a tomb from which He would rise in splendor three days later.

But what does that have to do with you? Why would it matter what one man did over two-thousand years ago?

You and I can never live as perfect human beings. I’ve tried, and it was the hardest seven minutes of my life! We need God’s help to secure our place in eternity. Jesus was the sacrifice that makes this possible. But God is not only interested in the “forever”; He is sincerely invested in the ‘here and now’.

Who do I say that Jesus is? He is my

Debt Settler: Jesus is not a debt collection agency, reminding you of every mistake. He is not in the business of setting up payment plans for all of your sin, either.  He settles the debt of all you have accrued  in the past (and I mean ALL of it!) and cancels it entirely when you ask Him to be your savior.  When asking His forgiveness,  no sin debt is  too big or too small. He is waiting to set you free!

Game Changer: Your rules? The way you’ve always handled challenges on your own…He doesn’t even need to see the playbook. He wrote a better one! He changes the trajectory of your life in ways you cannot imagine….in ways you will be so humbled by.

Name Changer: When you accept Jesus, your name is written in permanence in God’s book of life. It isn’t penciled in, jotted down hurriedly. It is written in Spiritual Sharpie, bold and eternal. Your name, and your life, becomes His as you are adopted into His family. The name He remembers you by when He thinks of you? “Mine.”

Life-Giver: I want the kind of life that is eternal, but let’s be honest…I’d like it to be pretty awesome here, too. Jesus doesn’t want us trudging through each day with just enough energy to survive until we get to heaven.  Here’s what Life-Giver Jesus has to say about that in scripture: “The thief comes only to steal and kill and destroy; I have come that they may have life, and have it to the full.” John 10:10.

Friend: Why the Creator of the universe would want to hang out with me, I have no idea. But for some reason, He does. If he were a great human teacher, that would be humbling enough; but no. Jesus, in dying on the cross and raising to life, bridged the gap between the Holiest of Holy Ones and puny, neurotic, recovering alcoholic, generally-all-around misfit and master of mistakes – ME. His Holy Spirit never leaves my side and calls me “friend”.  And that’s a miracle.

Who do you say that He is? It matters very much.

My name is Jana Greene, and I say He is also the Savior of the world.