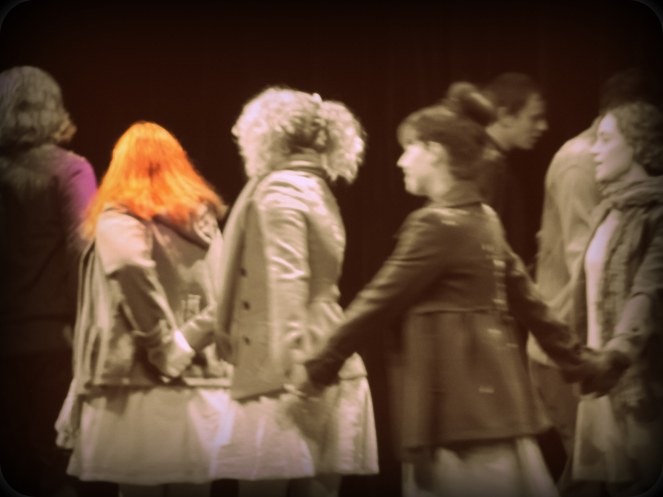 The Houston sun beat down on the playground on a hot September afternoon. Gathered on the asphalt, we second-graders were sweating rivulets and waiting with anticipation – or deep-seated dread – for the P.E. Teacher to pick Team Captains for the barbaric spectacle that is a game of Red Rover.

Two kids were chosen. They are always the same two kids in the class.

Red Rover, for those of you ne’er battle-scarred among us, is a game in which two teams of equal size form opposing arm-in-arm chains that one player on the opposite team must run through and break.

“Red Rover, Red Rover, let Billy come over…” On and on, one single child at a time. Chanting and hollering, and little Billy running like a bat out of Hell toward a line of children linked arm-to-arm. Running towards the weakest link in the chain, and not slowing down before crashing the gates.

Second only to Dodge Ball in giving grade-school children major anxiety attacks, Red Rover is not horrible only because of it’s inherent violence. It is horrible because it is one of many P.E. games that required The Choosing.

The Choosing is brutal. The Team Captains – two high priests of the playground – decide who lives and dies, socially. If your name is called, you are wanted. You are valued. You are a member of the team’s first draft.

It is Board of Education sanctioned Hunger Games. But alas, it is a good lesson for the many trials life would serve up long after childhood. There are many occasions of The Choosing throughout life.

That day in September, I wished I could have disappeared. And on many previous occasions of this sort, I had. Bathroom. Nurse’s office. Water fountain. Anything to be anywhere else than here. But that day, I could not be dismissed.

I was the last one picked.

Far worse than being a valued member of the team who suffered normal occupation-of-being-a-kid injuries (Red Rover has dislocated many a young shoulder, bruised many a second-grader’s arm) was being the last kid picked who stands on the end of the game line and really never links arms with anybody.

I’m grateful to know that He loves me and chose me. I didn’t always know that, and even after I ‘knew’ it, I didn’t accept it for so long.

In the The Choosing, He chose me.

It’s so universal, that desire to belong.

Be still and listen…

That nagging feeling you have that you are never alone and that there must be something out there, someone who cares about you? That’s your Heavenly Father. He is pursuing you for his team. You can link arms, and when you do, the gates of Hell itself shall not break through and harm you.

Your name is being called. You are wanted. You are valued. You are a member of your Creator’s first draft.

You don’t have to stand in the heat, feeling invisible.

So many people don’t know that God chooses on purpose to love them. So many people need to know! If He chose you, who can be against you?

In The Choosing, you were first chosen. Through Christ you are invited.