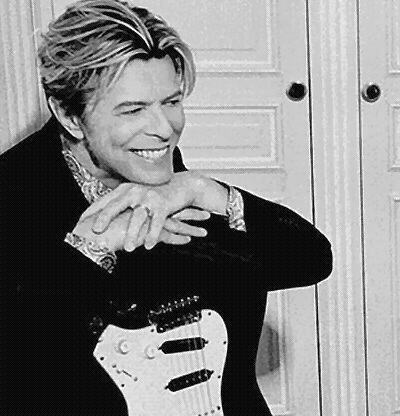 I purposefully took my time to write this piece, as I wanted desperately to do the memory of David Bowie justice. Thanks for the memories, O Great One. You will be missed.

I fell HARD, much like the object of my desire who fell to Earth, when I first came to love his music, and again when I found out he passed away.

As a young girl, I’d  heard Space Oddity play on the radio and was completely transfixed. What did I just HEAR? I’d always loved music, but this…this? This was another thing altogether.

From then forward, I was obsessed. Everything Bowie wrote or sang, every cameo he made in a film, every poster featuring his amazing face from obscure and punk-ish Houston area shops, every book written about him – I couldn’t get enough. My bedroom walls were plastered with his beautiful visage.

I was David Bowie two Halloweens in a row. First, Ziggy – and then as Bowie from his Serious Moonlight tour. In retrospect, it seems a little creepy but I promise you, my intentions were purely meant to be the sincerest form of flattery. (There is photo evidence of the latter picture. I think I was 16 years old.) 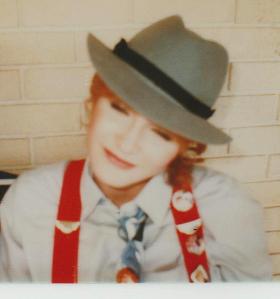 By the time Bowie enjoyed another wave of popularity even among my peers with “Let’s Dance” in 1984, I resented that other people were just now appreciating him.

SO mainstream, ya’ll. Have you even HEARD of Ziggy Stardust?

Still, I played the new album into the ground in my Sony Walkman cassette tape player – always with ear phones in so that I could enjoy it as loud as I pleased and as privately as I desired. Rewind, and play again. And again.

When I went to see Bowie in concert on his Serious Moonlight Tour, I’d spent hours fantasizing about meeting him, and – possibly one day, you know, marrying him and enjoying a lifetime soaking of his supreme and inconceivable amazingness. Pretty standard teenage girl stuff, but it didn’t feel contrived.

It felt possible, silly as it seems now.

Bowie made me believe anything was possible.

I would try to get my friends to listen (especially to the old stuff) and they would be like, “Yeah, he’s okay.” And I was like, “ARE YOU NOT HEARING WHAT I AM HEARING!?”

So, when I was growing up, everyone was all Madonna and Duran Duran and Rick Springfield and Pat Benetar, and I’m not dissing any of those artists.

But Bowie? He belonged to ME.

Maybe he belonged to you, too.

So I hope that you understand that –  as I write this post – I am considering the David Bowie who belonged to my heart. He will always be THAT Bowie to me. When I was going through a very tumultuous family life, he was a constant and his music was my therapy.

He taught me so much in those tender years, and I wouldn’t have grown up the same person without those lessons:

He made it okay to feel misunderstood.

The world is not going to understand you. You are entirely too unique to be fully understood, and thank God for that. Bowie did music like nobody had ever done before. NOBODY. He didn’t really care about topping charts or being popular. It was all about the music, man.

Pale and pasty? The Thin White Duke fit the bill. His teeth weren’t great. His nose was crooked. But no matter how many ch-ch-ch-changes his persona underwent, I sincerely thought he was the most beautiful man on the planet. You go on ahead and wear makeup and spike your hair and shave off your eyebrows, and dress in an unforgiving leotard, you cool, confident cat, you.

(Oh, and his eyes were two different colors, too. Did I mention that?  BRB…SWOONING.)

Reinventing yourself is perfectly acceptable.

Do it unapologetically, or not at all.

One of the things that stuck out to me is that he treated reporters interviewing him with the same respect as he might the biggest names in the music industry. He was by almost all accounts, just a really kind person.

A gentleman’s gentleman. Equally at ease performing “Dancing in the Streets” with the venerable Mick Jagger as singing a duet of “Little Drummer Boy” with Bing Crosby.

Be refreshingly positive whenever possible:

Whether I like it or not,  Bowie planted a seed of compassion in my spirit for the androgynous, the sexually confused, the gender benders.

I still don’t really understand transsexualism, etc. I’m just being honest, it’s just not my struggle. But Bowie showed me that it’s essential to love people different than ourselves. His sexuality, which seemed to morph as often as his persona, just simply was NOT THE MAIN THING about Bowie. He was so much more. I still carry that seed of compassion, and I’m grateful that he taught me how to germinate it.
You can love, admire and respect people who you don’t understand AT ALL. It’s just that simple.

Don’t let anyone put you in a box.

Bowie Culture is that it’s okay to reinvent yourself 1,000 times. You don’t owe anyone an explanation either. Switch it up and let that freak flag fly.

Be the best WHATEVER you authentically ARE.

“And these children that you spit on, as they try to change their world, they’re immune to your consultations. They’re quite aware of what they’re going through.” (Changes)

A better set of lyrics about the angst of youth I’ve never seen, and likely never will.

It’s okay to be a little weird:

Did you ever feel like the weirdest kid on the block growing up? Me too. Bowie taught me that we’re all weird in our own ways. And that it’s pretty wonderful, actually.

This lesson would come later in my life and in his. Like a good friend that you keep up through the grapevine, I’d heard that he’d conquered an addiction to cocaine in the ’80s. While not surprising that a great talent did battle with a drug (creative people often do) he inspired to to believe I may conqueror my own alcoholism one day. And I did. I’ll always appreciate his candor in owning his disease and strength in overcoming it.

And lastly, being a spiritual Seeker is an admirable pursuit.

Although Bowie experimented with all kinds of spirituality, it seems he camped out in Christianity, which gives me so much happiness, being of the faith myself. I can’t wait to see him in The Kingdom, maybe share a cup o’ Joe with him, and tell him what a difference he made in the life of one little girl.