Greetings, readers – I want to wish each of you a very happy new year!

Earlier this week, something earth-shattering happened. I attended my 12-step home group and picked up my 16 year chip. Sixteen years! I didn’t even know they made chips in that denomination, but alas, here it is. It’s made of metal, even. Isn’t it beautiful? 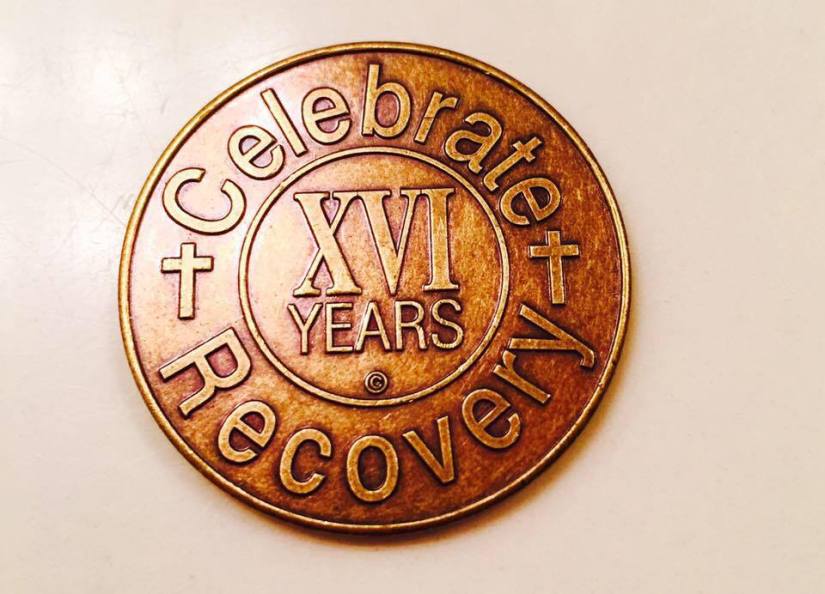 To others, it may look like a regular token, but it’s actually much more than that. In the 16 years I’ve been in recovery from alcoholism, I cherish picking up every single one each year. From the blue, plastic surrender chip that began the whole journey, to all of  the AA and Celebrate Recovery chips collected in between. You might wonder – what’s the big deal about a little chip?

Let me just boast about my weakness for a moment:

A chip represents an entire 365-day span of time in which I felt every single one of my pesky feelings without reaching for a drink.

It’s a keepsake that reminds me to boast on my weakness, because God’s grace is enough; it’s all I need. HIS strength comes into its own in my weakness.

It commemorates another entire trip around the sun in which my craziness did not defeat my sobriety. And my craziness can be very persistent, believe you me.

It is a tangible totem of what the Grace of Almighty God looks like.

It’s a little, round harbinger of possibility. I made it another year without picking up. I can do it again.

It’s a metal manifestation of tribal-ness. Picking up a chip is cause for rounding applause from others in the meeting (who are also feeling every pesky feeling and understand, but are doing it one day at a time, too.)

It’s a trophy for devil-slaying. And no, I don’t think I’m being a drama queen by making that statement. Seriously, ya’ll.

It’s a souvenir of a life led a little more manageably.

It is a reminder that God is still in the miracle business, because in some of the tougher years, I held on by the skin of my teeth.

What might appear to be a silly little token is so much more.

“Because of the extravagance of those revelations, and so I wouldn’t get a big head, I was given the gift of a handicap to keep me in constant touch with my limitations. Satan’s angel did his best to get me down; what he in fact did was push me to my knees. No danger then of walking around high and mighty! At first I didn’t think of it as a gift, and begged God to remove it. Three times I did that, and then he told me, My grace is enough; it’s all you need. My strength comes into its own in your weakness. Once I heard that, I was glad to let it happen. I quit focusing on the handicap and began appreciating the gift. It was a case of Christ’s strength moving in on my weakness. Now I take limitations in stride, and with good cheer, these limitations that cut me down to size—abuse, accidents, opposition, bad breaks. I just let Christ take over! And so the weaker I get, the stronger I become.”
2 Corinthians 12:9-10 [Full Chapter]

I may have wanted to drink several times over the past year, but as I hold this chip in the palm of my hand, I’m so glad I didn’t. I’m so glad that I asked God for help. I’m especially grateful that I have learned not just how to ask for help, but to ACCEPT it, as well.

It’s a big deal because it represents hope and accomplishment and another solid year of learning, and lurching, and learning again. A year of (largely) moving in a forward direction.

I am praising God for this little chip that’s not JUST a chip. Grateful.

And grateful to share these musings with you, dear readers.

God bless us, every one.

View all posts by Jana Greene