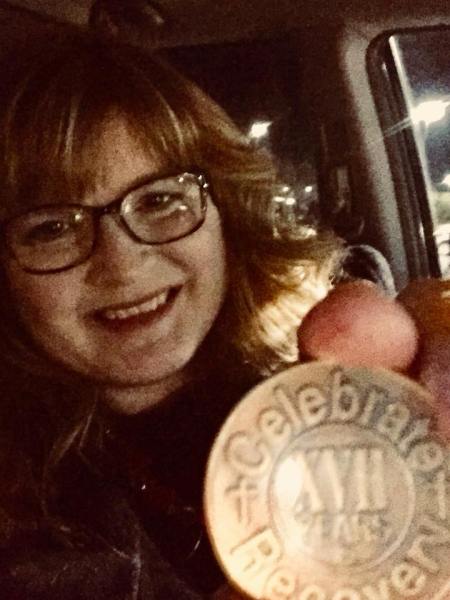 I know I’ve milked this 17 years of sobriety thing for an entire week now, and for that I’m sorry. If you are sick of hearing about it, I don’t blame you in the least.. But you are my friends and I want to be 100% transparent with you.
January 3rd is my official DOS (date of sobriety). I was going to pick up my chip on the 1st but it was special order and hadn’t arrived yet, which was fine with me. Because I really – for the first time ever – had zero enthusiasm for collecting that !little token of time earned through sobriety.
I rather resent the past year, which has been the most difficult to avoid relapse, if I’m honest. I made it – but by the skin of my teeth. At one point, I even opened a bottle of brandy I found that my husband had had for years and sat it on my bedside table. I curled up on my bed and cried. Then I opened the bottle. And I smelled the brandy, which smelled like an old friend, or how a grandpa used to smell when you were a kid. I never should have smelled that Brandy. Then I cried some more. I had words with God, and he listened so patiently, and I could feel His Spirit near me and in me, and it aggravated me to no end because without that presence I could pick up that bottle and just let the dragon have his way. I was so exhausted from fighting it and running from it.
See, having an addiction is a lot like having a dragon follow you around everywhere. And I mean EVERYWHERE. Your deepest thoughts. Your stress and anxiety. The crapper. EVERYWHERE. He taunts you, sometimes far more aggressively than others, This past year,, he has been practically crawling up my ass. One thing after another after another. In that moment in a fetal position on my bed with a bottle of Dragon Sedative sitting RIGHT THERE, so close – I wished God would bugger off.
But, that sliver of my soul that so values the life I’ve been granted – this beautiful second chance – gave voice above the din of my disgruntled sobbing. My lips said “please.’ Just “please;” that’s all. Over and over and over and over until I wasn’t crying anymore, and the brandy starting stinking, and I could feel my father’s arms around me. I wiped off the snot and tears, took the bottle to the bathroom sink, and poured it’s contents down the drain. I didn’t feel victorious. I felt nothing at all.
Soon after, that damn dragon was on my heels again. But I started trying to self care a little better – including joining my tribe at meetings. As the big anniversary approached, I felt unworthy of going through the ceremonial celebration of Chipdom, whereas I had ALWAYS looked forward to picking it up every other year. I’ll be sober 17 years. Cherrio! (Sorry, I’ve been watching a lot of “The Crown.”) Yay. Blargh. I don’t deserve it. I’ve been a terrible role model for recovery lately.
But something happened between last week and this week. Clear up until the moment I arrived at the meeting (with one of my daughters, who came for moral support,) I felt that same malaise.
The program is the same each week, as it was tonight: Worship, the reading of the 12 Steps, announcements, and then The Bestowing of the Chips.
Two people went up to pick up surrender chips, and my heart melted for them. I remember picking up that chip and finally admitting I had been drinking myself to death. I kept going – 90 meetings in 90 days – collecting chips with awe and wonder every noteworthy time chips were given.
Hey…..
Today is January 8, 2018. I can remember when I could only make it one day without drinking and having to start over. I remember when a month was an eternity, but a wonderful eternity of self-discovery. The whites of my eyes lost the yellow tinge. I worked on ME. And most importantly, I didn’t drink.
Well guess what? 2017 was a dadgum BITCH. Every thing in our lives changed, and not for the better. I had 6-10 migraines per month. I’ve still not found employment. A million stressful circumstances riled up my dragon like crazy.
But I did not drink. By God’s GRACE.

Tonight – when my friend who was giving out chips asked with a wink if anyone here tonight has 17 years, I felt like the conflab Grinch himself – my heart started expanding.
OH MY GOD. 17 YEARS.
And despite the suckiness of 2017, I DID NOT DRINK.
I became suddenly exhilarated beyond explanation. My daughter stood and applauded as I approached the stage to pick up my chip. I gave my friend a hug and he put the brass chip in my hand.
And I sobbed because the weight of it felt like lead. It felt like all the weight I’d been carrying on my shoulders for a year, but as golden treasure, not the heart-heaviness of  dragon bullying. I became giddy, ya’ll. I’ve never been so happy to pick up a chip in my whole entire recovery life, and I’ve had some doozies of difficult years. The dragon has tried to push me off the wagon many, many times, but today?
God flipped the script. All the ways I felt I’d failed this year felt instead like victories. Yes, I had close scrapes, but God gave me the strength to carry on and hold fast to my precious recovery – the thing that has made all other good things possible. The reason my children are not motherless. The reason I’m not 6 feet under. The reason I get to watch my grandchild grow up.
So ya’ll….I think this chip is my FAVORITE chip. Of. All. TIME. The hardest earned. Ultimately, the most gloriously received.
Oh God, thank you.
Thank you for getting me through, even if my the skin of my teeth. It doesn’t matter. I didn’t relapse.
(And it could not have happened without the boundless grace of God. And WONDERFUL friends. And my tribe – my homegroup. I couldn’t have done it without the support of my husband.)
And the dragon?
I. SLAYED. THAT. BITCH.
SLAY.
The sword is sharpened with every hardship.
And I’m so grateful.