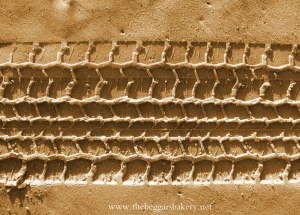 A dear friend and I were having a discussion about self-condemnation the other day; about how it is a struggle for both she and I to avoid condemnation of ourselves.  When I put myself down, I am believing what the enemy says about me is correct.    That with my past actions –I am worthy of condemnation.   I get stopped in my tracks, stopped from moving forward.  Whatever holy and good things I was hoping to do today to pass along the love of God, gets buried like tires stuck from driving on deep sand.  The more I try to move forward out of a self-condemnation mindset, the more my wheels spin.

I am no Theologian.  I am un-schooled in psychology.  But I am a sinner, and I have taken putting myself down to an art form.  I’m working on breaking out of self-condemnation; working on learning not to self-condemn.

In my life, condemnation usually happens in one or two ways.  Half the battle (if not more) is remembering who is the perpetrator of this oppression is – satan.  If he can keep me stuck like tires in the sand, I can’t go anywhere forward-moving.

My self-condemnation says:  The things I have done in my past determine my feelings of worthfulness to God now.

Confirmation by the Enemy:  Who are you to tell other beggars where you found bread?  You made every mistake in the book, and now you want to spread the Gospel.  If you want to help God, don’t drag His name into your mess.   Who is going to listen to you?

My self-condemnation says:  I can’t do anything right…I am my own worst enemy.  If you compliment me, I will find a way to point out something negative about myself so fast I don’t even have to think about it.  I just keep messing up, even though I love God with all of my heart, with all of my soul, with my entire mind.

Confirmation by the Enemy:  I am your worst enemy, but thanks for listening to what I have to say.

One stream of thinking applies to my past, and one to my present and future.  But both of them show a lack of trust in the one who pulls me out of the ruts of my own making.  I don’t need self-esteem, I need my esteemed Savior, Jesus Christ, who can and will do for me (as much of a mess as I am) for you, for anyone.

I researched a little bit the word “condemn”, hoping to find an accurate definition, and learned these things about the word.  Those of us who apply condemnation to ourselves are, in essence:

1.       Declaring ourselves to be reprehensible, wrong or evil without reservation, usually after we weigh “evidence” that we decide is obvious.

2.       Associating ourselves with the following synonyms:  Damned, denounced, denied, and pronounced guilty and unfit.  Oh, and convicted, sentenced and DOOMED.

Those are big-ticket items, Spiritually.  Self-condemnation is really an act of sentencing ourselves to doom.

Interestingly, there is only one antonym- one opposite – given for the word in Webster’s online dictionary:

That’s pretty powerful. There is a battle going on to determine how we view ourselves.  We can’t always get to the  self-loathing feelings before they get to us, but we can be lifted up out of them.  As a matter of fact, we have already been lifted out….

Romans 8:1-5:  So now there is no condemnation for those who belong to Christ Jesus.And because you belong to Him, the power of the life-giving Spirit has freed you from the power of sin that leads to death.  The law of Moses was unable to save us because of the weakness of our sinful nature.  So God did what the law could NOT do.  He sent his own SON in a body like the bodies we sinners have.  And in that body God declared and end to the sin’s control over us by giving His Son as a sacrifice for our sins.  He did this so that the just requirement of the law would be fully satisfied for  us., who no longer follow our sinful natures but instead follow the Spirit.” – (NLT)

There is no fine-print disclaimer to this verse.  It doesn’t say, “some” or “a tad” or “a smidgen” of condemnation of those who belong to Christ Jesus.  It says there is NO condemnation.

On my own, I am totally condemnable.  But with Christ as my salvation, I am just  BLESSED.

Blessed to know that negative self-talk is NOT of God, and that I have the authority to rebuke it.

Blessed to know that the Lord is infinitely patient, and doesn’t expect me to change overnight.  I’ve honed some really effective self-condemnation techniques over a lifetime, and it will take His supernatural help to reprogram the way I think.

Blessed to know that I cannot “out-mess” His love for me…I am His daughter.  Like a good father, He has already done for me what I could not do for myself.

Blessed to know the sound of my Father’s voice, whose words never tear me down, but build me up in love.

Blessed to know that the enemy of God is referred to in the Bible as ” The Author of Lies”, unable to tell the truth.

No Condemnation at all, for those in Christ Jesus!
AMEN!